Cheers! Cheeky shopper casually opens bottles of wine and swigs from them in the supermarket aisle before deciding to buy the 9th one

By Phoebe Eckersley For Mailonline

A wine lover has been filmed tasting ‘more than 50 pounds’ of different bottles from a supermarket before buying the ninth one.

In the bizarre clip, a shopper can be seen lifting a bottle from the shelf and unscrewing its lid before taking a sip, in the city of Nakhon Ratchasima, north-east Thailand.

He pauses for a moment as though he is trying to decide whether the wine hits the spot. 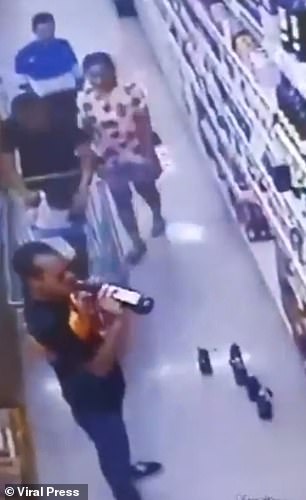 A man was filmed picking up nine bottles at a supermarket in Nakhon Ratchasima, north-east Thailand, on November 2

Moments later, he puts the bottle on the supermarket floor and picks up another, in the CCTV footage on November 2.

He takes an hasty sip for a couple of seconds before putting it on the ground.

Meanwhile other customers, who are holding hopping trolley’s, pause as they examine the other shelves.

Appearing extremely casual about what he is doing, the wine lover leaves his tasted bottles in a row on the ground. 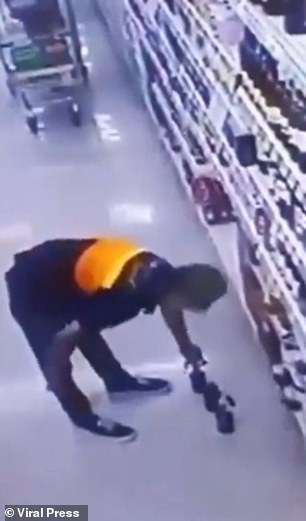 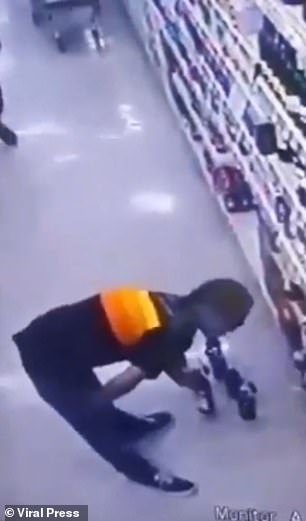 He then steps on his tip-toes to reach some bottles further back.

He unwinds their lids and confidently takes a swig as though it is nothing out of the ordinary. Moments later, he is seen running his fingers across the bottles as he figures out which one to try next.

On his fourth bottle, he glances over to the nearby shoppers and begins to pick up his pace.

His routine is methodical and suggests he knows what he is looking for.

The man gradually moves further down the aisle as he perhaps wants to venture into a different region of wine. 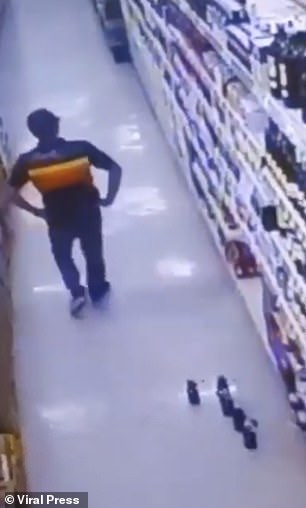 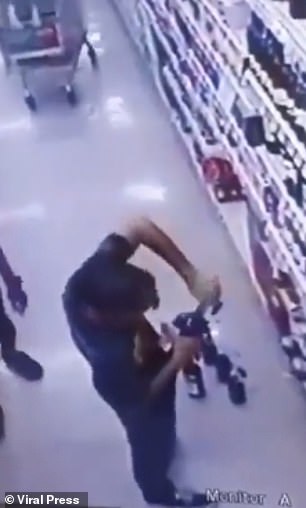 The mystery man consumed ‘more than 50 pounds worth of wine’ according to the supermarket staff. He had disappeared by the time security had arrived

He goes back on his path and rests his hands in his jean’s pockets as he tries to come to a decision.

Appearing clueless, he stands back to observe the shelves of wine and does not notice a family trying to get past.

They manage to squeeze their shopping trolley past him and say nothing – just a mere turn to see what he is up to. Meanwhile he puts his sixth bottle back onto the shelve, with five still standing on the floor. 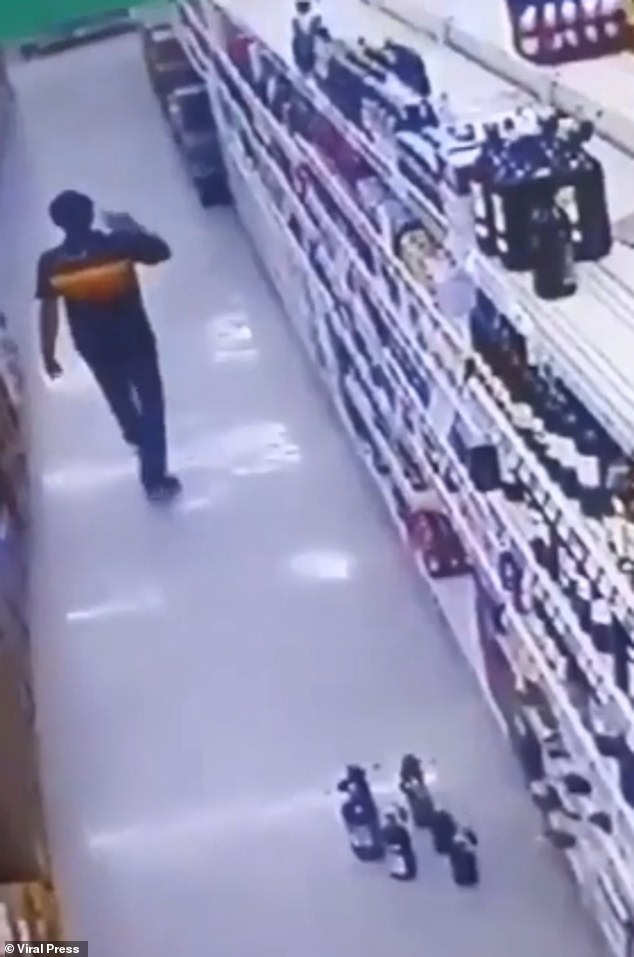 Leaving the bottles behind, he finally decides on an Argentinian white wine, and sips the bottle before heading to the counter to pay

On his eighth bottle of red, he leaves the cluster of bottles on the ground and scans the white wine section.

He settles on his ninth bottle, which is an Argentinian white, and saunters down the aisle sipping the wine before paying for it at the counter.

The supermarket staff claim that the shopper had drunk ‘more than 50 pounds worth of wine’ and disappeared when the security guards were called.

They ‘checked the damage’ and sent the CCTV footage to the police.

The store manager claimed she had never seen the man before.