By Tim Stickings For Mailonline

A Buddhist statue collapsed and killed the religious leader who had just unveiled it in a freak accident in Thailand yesterday.

Village chief Saman Chanthayothi, 52, was the guest of honour at the ceremony in Khon Kaen where the statue was unveiled on Monday afternoon.

The monument was intended to bring good luck and fortune to local residents.

But as the chief tugged away the cloth, the foundations cracked and the giant Buddha fell onto Saman’s head, pinning him to the ground.

Freak accident: A giant Buddha statue lies on the ground after it toppled over and crushed a religious leader who was unveiling it in Khon Kaen, Thailand 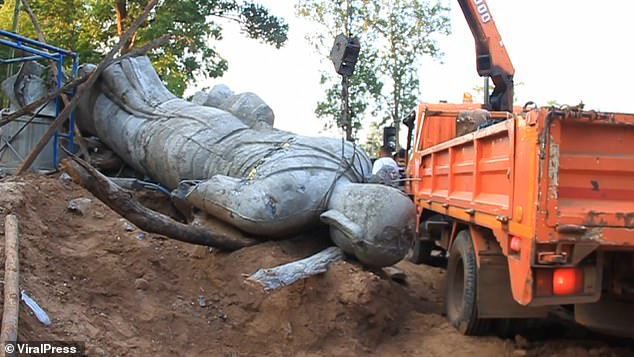 Collapsed: The 16ft monument is winched off the ground by emergency services after the fatal accident yesterday afternoon

Locals scattered in panic but when the cloud of dust had settled, they gathered around and found the village leader trapped and already dead.

Residents were unable to lift the 16ft monument and waited for the emergency services to arrive to winch it away with a crane.

One resident, Surapol Thepboonma said: ‘I was standing beside Saman when he was unwrapping the statute.

‘Suddenly I heard a crack and people were panicking. They ran in different ways.

‘We gathered around the fallen statue after the dust had settled and we were shocked to find our village chief lying dead under the statue with his head crushed.’ 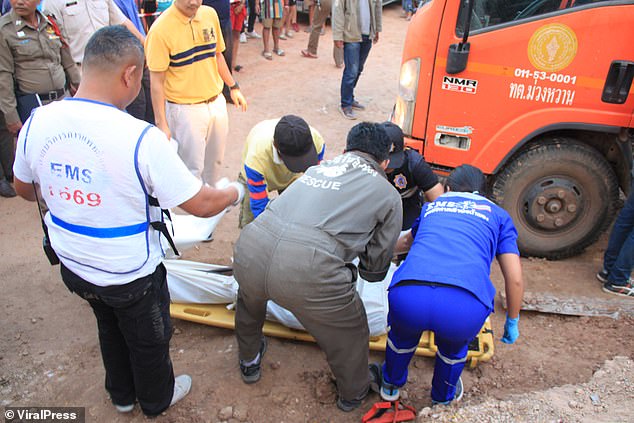 Tragedy: Rescue workers take the village chief’s body away after he was killed by the falling Buddha statue 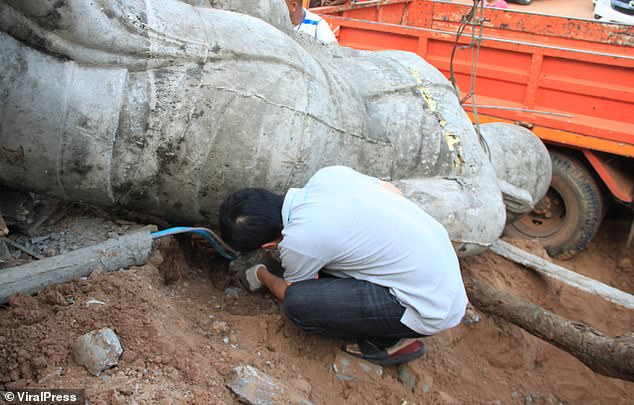 Recovery: A man burrows underneath the 16ft statue, which had been intended to bring good luck and fortune to local residents 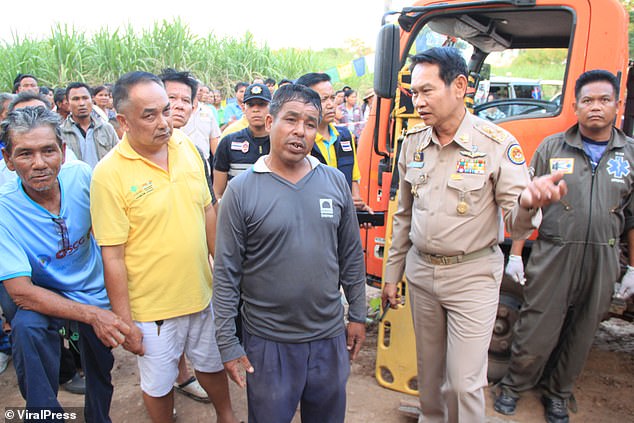 Emergency: A crowd of people including police, paramedics and rescue volunteers gathered at the scene and found that the statue’s concrete base had been defective

They discovered that the statue’s concrete base was not strong enough which caused it to fall while being unveiled.

The family took the body to the temple to be held there for a religious ceremony.

They accepted the explanation that the death was an accident and did not request further investigations.