Revealed: Twenty Americans with ‘abnormal’ health conditions and stomach pains on cruise ship spooked authorities, causing it to be stranded for two weeks with 1,455 passengers on-board before it was finally allowed to dock in Cambodia

By Terri-ann Williams For Mailonline

Twenty US passengers suffering ‘abnormal health’ and stomach pains on board a cruise liner have emerged as the likely reason authorities were spooked and kept the ship stranded at sea for two weeks  amid the worldwide coronavirus outbreak.

The ship, MS Westerdam, has 650 Americans on board and has finally been allowed to dock in Cambodia today.

Its 1,455 passengers and 802 crew members had been turned away by Thailand, Taiwan, Japan, Guam and the Philippines.

So far no cases of the deadly virus have been found on the Holland America ship.

MS Westerdam cruise ship is seen near a port in Sihanoukville, where it has been granted permission to dock following nearly two weeks at sea after being turned away by five countries over fears that someone aboard may have the coronavirus 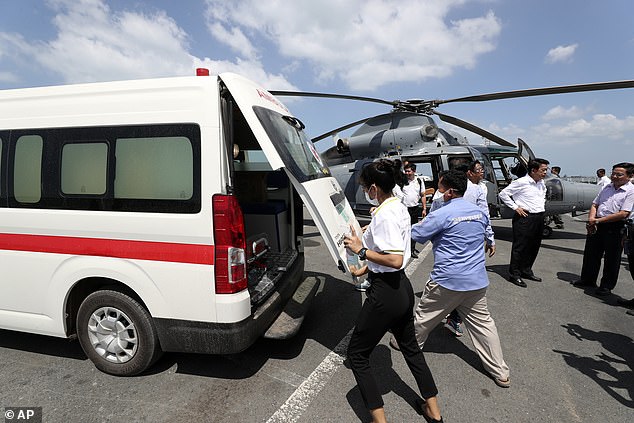 The Sun today reported that officials are currently checking the health of those on board after twenty passengers experienced various health issues.

Some passengers on board tweeted their relief at being allowed to dock with many saying they were ‘elated’ at the prospect of being on dry land.

Another passenger said there were ‘so many moments’ they thought they would be allowed to dock at a country, only to be turned away.

Angela Jones called it a ‘breath taking moment’, and questioned whether or not it was actually real. 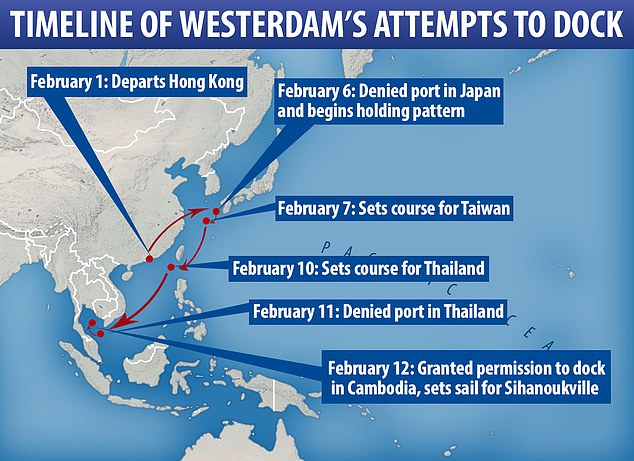 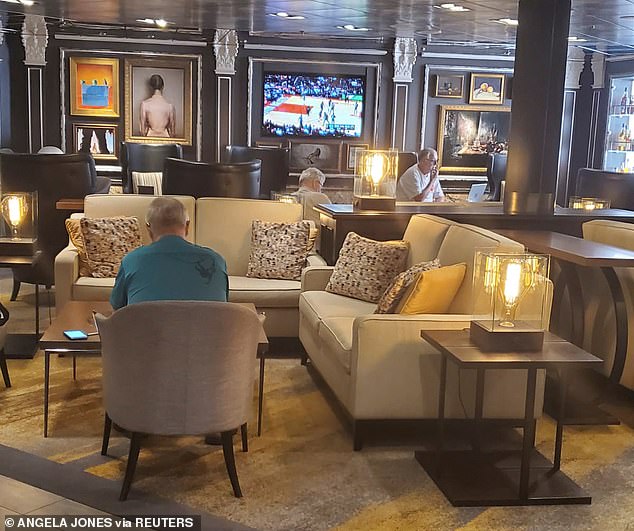 Pictures this morning showed the ship docking in Sihanoukville.

From here passengers will be able to fly to the capital of Phnom Penh before finally returning home.

In a statement the cruise liner said: “All approvals have been received and we are extremely grateful to the Cambodian authorities for their support.’

This is while Tedros Adhanom Ghebreyesus, the director-general of the World Health Organization, said he was pleased Cambodia had accepted the ship, calling it an ‘example of international solidarity’.

He also added that outbreaks can bring out the ‘best and worst’ in people.

So far more than 60,000 people across the world have caught the disease, with over 1,000 deaths having been reported.

A 14th case in the US was reported yesterday. The person had arrived at Marine Corps Air Station in Miramar in California last week after taking a flight from Wuhan.

The patient is currently in isolation in San Diego.